There has been this awesome study in the late sixties about how 4 year olds would resist temptation and delay gratification. What's really awesome about it is that the researchers later found out there was a correlation between their ability to delay gratification and their later success in life.

One quick and entertaining way to grok that study is to watch this short TED video:

You can find more info in this article from the New Yorker.

If you read through it you will learn that one secret to resit temptation, delay gratification and reach higher goals is to stop thinking about the gratification and focus on something else. Better yet, it seems actually possible to train your mind to do just that...

I guess one immediate reality check for you out there is: can you delay playing X-Box or watching Lost in favor of finishing this new project today? In other words D.I.F.N? I know I can... but that's only because I have no X-Box and I don't like Lost... It was a whole different story at the times I was hooked on Boston Legal... ;)

This entry was posted by SEOfrancois and filed under Other. 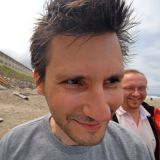